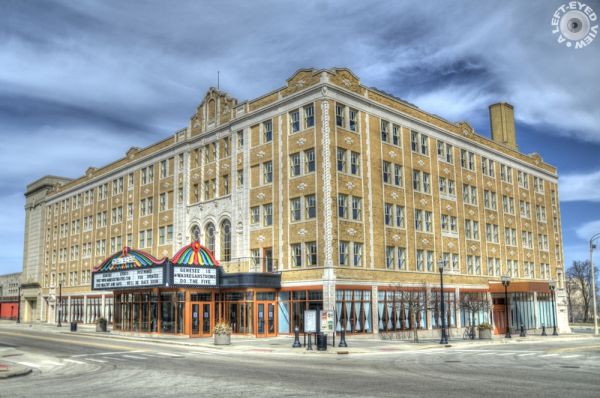 lefteyedview has linked to this off-site content:
https://lefteyed.aminus3.com/image/2020-04-09.html
Steven lefteyedview
All Seats Available!
Located at a normally bustling corner, a temporarily closed Genesee Theatre in downtown Waukegan, Illinois hasn't had any acts, shows or musicals since mid-March due to the coronavirus pandemic. The theatre has cancelled all performances until at least May 1st; most likely to be extended if the pandemic does not subside. Stay safe!

A 115,000 square-foot state of the art facility, the Genesee Theatre has expansive lobbies and lounges. And the stage size has been doubled and a balcony expansion has raised seating capacity to over 2,400, making the Genesee Theatre one of the largest facilities of its kind in the region. In addition, to ensure that there is no question to the splendor of this facility, a one-of-a-kind, 18 foot, Baccarat crystal chandelier has been added to the grand lobby. The chandelier, which originally hung in Seattle's Orpheum theatre, is valued at $350,000 and weighs 2,200 pounds, includes thousands of pieces of crystal and features gold-plated sconces. Kept in boxes since 1967, the chandelier was sold for only $100,000 to the Genesee Theatre by Mr. Louis Bianchi, and the remaining $250,000 was donated to the Genesee Theatre's renovation efforts.

The Genesee Theatre re-opened its doors on December 3, 2004 and will continue to provide the highest quality of performances including comedians, Broadway productions and national and regional musical acts.