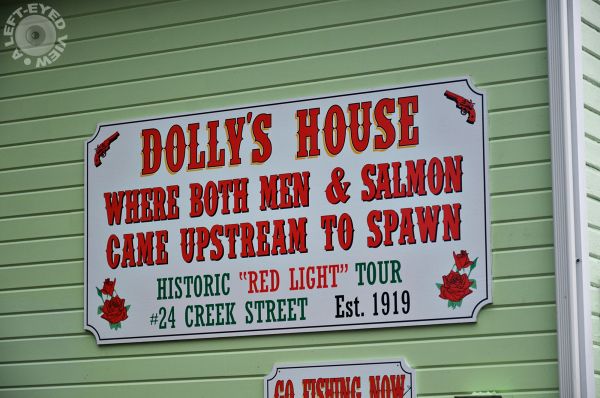 lefteyedview has linked to this off-site content:
https://lefteyed.aminus3.com/image/2016-04-12.html
Steven lefteyedview
A Place to Spawn??
A sign spotted on the side of Dolly's House on Creek Street in Ketchikan, Alaska.

Dolly Arthur, born in 1888, realized she could make more money from the attention of men than she could working as a waitress. In 1919, she wound up in Alaska, having discovered a way she could make a significant amount of money for that era. Dolly spent her first year in Ketchikan at the Star, the only house on Creek Street actually classified as a brothel because it employed more than two women. Then she bought her own house.

Creek Street was referred to as the place where men and salmon went upstream to spawn. While single men openly walked the boardwalk (Creek Street) through the bordellos, married men used the more discreet Married Man’s Trail through the woods. The girls knew married clients by the mud on their shoes.
#signs #creekstreet #ketchikan #alaska
1.8k 0 0
Jul 17 2018